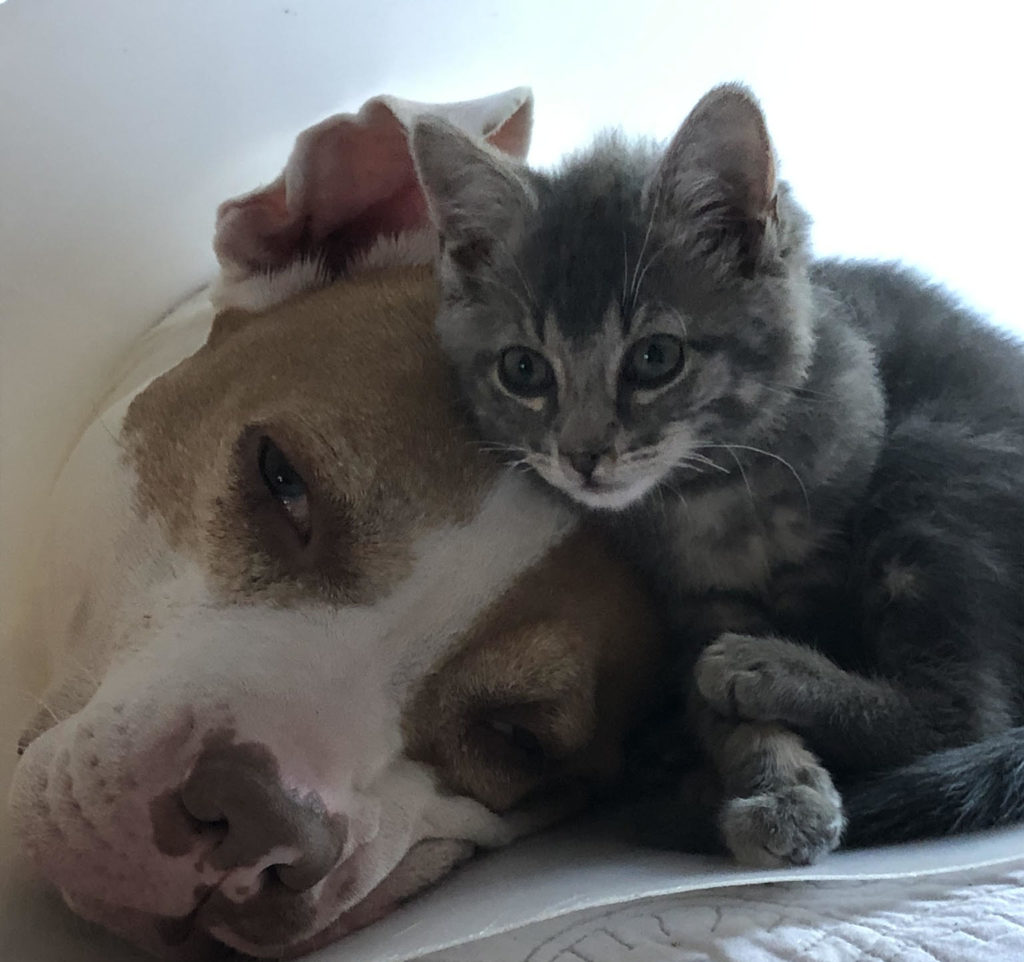 Indy and Luna
The special bond between two unlikely pals

It was the 11th hour for Indy when Capital Region resident Sharon O’Connor got the call on the fateful day that started a new chapter for both pup and dog mom.
Indy, a four-year-old tan and white Pitbull mix, had gotten herself into a jam. A fourth dog had been introduced into her established household and, as they say, the fur flew. Indy jumped into the fray, and when the dogs were untangled, Indy, now deemed an “agressive dog” was put up for adoption through Second Chance Rescue. As time slipped away, no one came forward to give her the home and care she needed.
Sharon’s friend Jack was concerned, she says. “He had petsat for Indy and knew her”. “He knew she deserved a second chance, that it had been the circumstance, not Indy’s disposition that caused her predicament.” His conversation with Sharon about Indy’s plight changed everything. Indy would be an addition to the furry and feathered friends in her household—a cockatoo, a sheltie and several cats and kittens.
Sharon, a nurse, made the journey to meet Indy. Jack accompanied her, to give a familiar and trusting presence. That first greeting resulted in a return trip with Indy and some counsel on getting her used to her new surroundings and also acclimating the pets in the household to her. Their relationship began with Indy as a fostered dog in Sharon’s home.
“We took it slowly,” Sharon recalls. She bought a crate for Indy to use when she was away from the house, and she set up a kennel outside. These weren’t Indy’s favorite things, because she wanted to be close to family, Sharon discovered.
The pets were introduced carefully to each other. “But they were nonreactive—no problem,” Sharon says. She recalls her sheltie, Scrubs, excitedly barking at a cat in a tree. Indy joined him side-by-side to quietly watch the acrobatic feline. And when Indy was stretched out resting, the cats liked to snuggle up against her.
Out and about in the yard, Indy acted like a pup, running to fetch a toy and make it squeak, or becoming obsessed with a bone. “When anyone came, she always brought something to the door,” Sharon says, like a welcome home gift no matter how short a time you’d been away.
Luna, a feral kitten, joined the household last spring. She was very ill with an upper respiratory infection, and her mother had stopped taking care of her. In adopting her, Sharon worked to get the infection under control and bottle-fed her. Luna gained strength to become a rambunctious kitten and the best snuggle buddy for Indy. Sharon captured a video of the kitten cleaning Indy’s ear.
Sharon had noticed a bump on Indy’s tail when she arrived. At the beginning of this past summer, the bump rapidly blew up into a painful ball. After veterinary visits the verdict was in—the tail needed to come off. Indy went home from her procedure with just a little nub of a tail left. She had to wear a recovery cone to keep her from interfering with the healing process. That “cone of shame” became something else for Indy. The five-week-old kitten Luna “was not going to let her be alone” and she climbed into the cone to be as close as she could get to nestle alongside Indy. Sharon says, “They were best pals with a special bond.”
Indy’s diagnosis was aggressive bone cancer, osteosarcoma, and the prognosis left her with only a few months to live. At this point, she adopted Indy, “so I could give her the best days for whatever time we had left.” There were many “couldn’t anymore’s” for Indy, including getting on the bed and bringing welcome-home gifts to the door. She shortly lost her appetite. But Luna continued to sleep fur-to-fur with Indy.
The dog who once had such a questionable future shared her sense of joy and love each day with her new forever family and created indelible memories for Sharon. Indy passed away just a couple of weeks before this publication. This article is a tribute to a very special dog and her loving family: Sharon, Indy’s furry siblings, and especially her little Luna.