Latest Articles
You are at:Home»Issues»September/October 2020»Enjoy the ride!

With sales through the roof, bikes are now the trendiest form of transport.

Even though the COVID-19 crisis has taken a heavy toll on most businesses—everything from mom-and-pop shops to national brands like Starbucks—not every industry has suffered during lockdown. Bicycle manufacturers and retailers are having a record year, as people have taken to the streets, paths and trails at a time when there is little else to do. This past March, children’s bike sales in the US were up 56 percent year over year, and adult leisure bike sales were up a whopping 121 percent, according to market research company NPD Group. Now, many major bike manufacturers are completely sold out of their products, and new bike lead times—the time it takes for a bike to ship once you order it—are stretching into late fall.
This bike sales roller coaster is playing out all over the Capital Region. Bike Barn Cycling & Fitness in Cohoes saw record sales in April and May, until new inventory from manufacturers dried up. “We’ve seen a huge increase in new customers,” says Edward Agans, owner and general manager of Bike Barn. “People are coming back after taking years off from cycling. They needed a way to stay active due to gym closures and wanting to stay healthy.” Graduate student Jared Short, who came home to Charlton when his school shut down this spring, has suffered from the bicycle inventory drought; he purchased a mountain bike from the bike-maker Orbea back in May, but won’t be getting it until October.
If you’re one of the lucky ones who had a bike before the pandemic or snatched one up before bikes became scarce, here are our top three area bike paths we recommend for taking your two-wheeler out for a rip.

Mohawk Hudson Hike-Bike Trail
Bike from the banks of the Hudson River in Albany to the shores of the Mohawk River in Rotterdam on the Mohawk Hudson Hike-Bike Trail. Riding from end to end (a total of 30-plus miles!), you’ll pass through Albany’s Corning and Riverfront Preserves, Colonie Town Park and Niskayuna’s Mohawk River State Park, and even under the Northway’s Twin Bridges.

Erie Canal Bikeway
In Rotterdam, the Mohawk Hudson Hike-Bike Trail becomes the Erie Canal Bikeway, which stretches 350-plus miles to Buffalo. West of Rotterdam, stop by Schoharie Crossing State Historic Site in Fort Hunter, Our Lady of Martyrs Shrine in Fultonville and the Arkell Museum in Canajoharie, all of which are along the path.

Zim Smith Trail
In Saratoga County, the Zim Smith Trail stretches nine miles from Halfmoon to Ballston Spa. Popular points along the path include Shenentaha Park in Malta and the public parking area in Round Lake (stop by Leah’s Cakery, right next to the trail, after your ride). 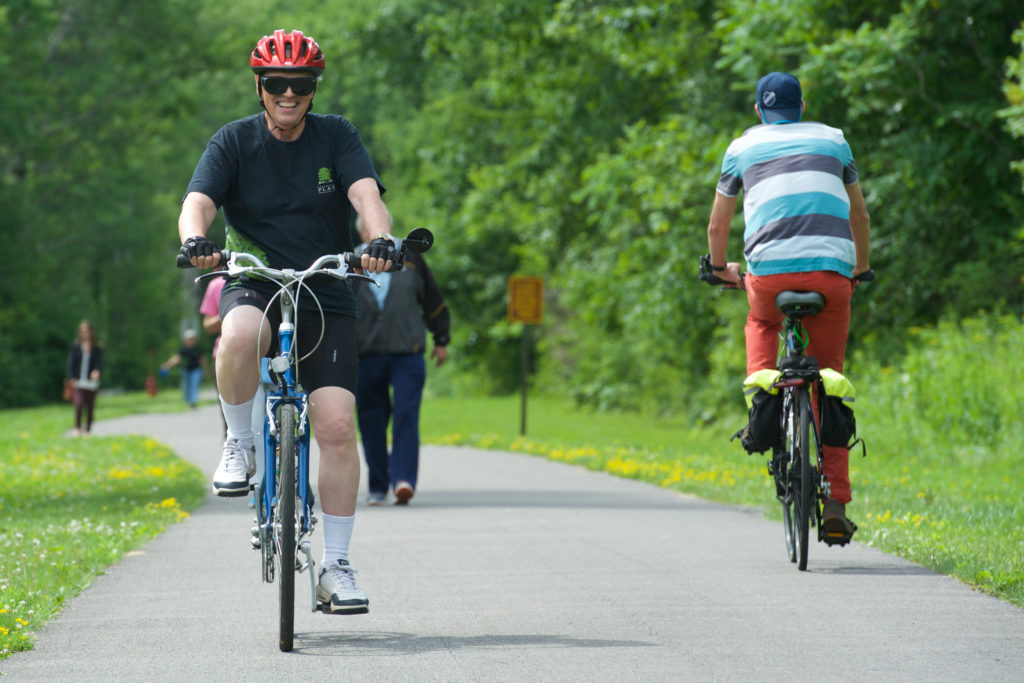