Latest Articles
You are at:Home»Issues»November 2016»Enjoying the brrrrr

There’s no place like home for the holidays—especially when home is the Capital Region. Bustling towns surround us, with a wide variety of festivities to ring in the season and celebrate the spirit of the holidays. From Lake Placid to Rhinebeck, Stockbridge to Manchester to Troy and Saratoga Springs, there is something for everyone just a short drive away or perhaps around the corner. Holiday walks, community musical marches, famous painting re-creations—even a giant puppet parade so whimsical, you’ll wonder if you’re dreaming—are all on tap this holiday season. Be sure to venture out and try something new this year. You never know what may become your newest tradition. 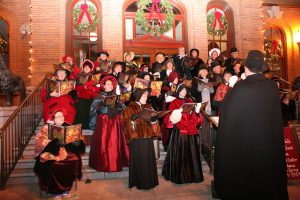 Saratoga Victorian Streetwalk: December 1
tourism.saratoga.org/events/details/victorian-streetwalk-with-the-saratoga-tree-lighting-ceremony-12-01-2016-4044
Celebrate the magic of the season on renowned Broadway at an event that’s been a Saratoga tradition for three decades. Kick off the night with the annual tree lighting in front of Putnam Market—Santa and Mrs. Claus will be there, arriving by horse-drawn carriage. Enjoy hot cocoa and cookies as elves roam the street and music fills the air. Be sure to visit the live reindeer too, as they rest up in preparation of their Christmas Eve flight around the world.
Take advantage of the later store hours to pick up some Christmas gifts or just enjoy the brilliance of the ornate window displays. The Festival of Trees will be in full swing at the City Center, so take a break from the cold and walk through hundreds of impeccably decorated trees, wreathes, and centerpieces. From the Victorian clad carolers lining the streets to the ice sculptures glittering in the chilly night air, Broadway will be abuzz with the joy of the season. The Streetwalk is a Christmas classic you won’t want to miss.

Sinterklaas
www.sinterklaashudsonvalley.com
The Sinterklaas festivities are a nod to the Dutch heritage of the Hudson Valley. Sinterklaas (later translated to our American Santa Claus) is at the heart of the traditional Dutch legend for which the celebration is named. Rhinebeck’s modern American version is anything but traditional though, with an artsy and eccentric spin on the tale, culminating in a holiday celebration that is all inclusive, nondenominational and downright inspiring.

Sinterklaas in Kingston: November 26
Sinterklaas Send-Off Celebration, a fun-filled day of activities in Kingston, concludes with a parade escorting Sinterklaas to his boat for a week-long voyage across the river to Rhinebeck, re-imaginings of the Dutch legend, where Sinterklaas sails from Spain to Holland.

Sinterklaas in Rhinebeck: December 3
The magic abounds as dancers, musicians, tightrope walkers and fire jugglers light up the town for Festival Day. There are crafting workshops to attend and countless characters to meet. The Children’s Starlight Parade, a large-scale puppet procession, is led by Sinterklaas himself, astride his white steed. The enchanting day closes with a pageant honoring the children and a community wish for peace. 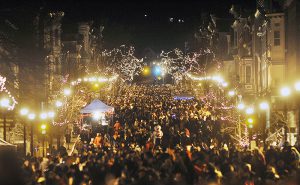 Hudson Winter Walk: December 3
hudsonoperahouse.org/winter-walk
Witness the dazzling metamorphosis of iconic Warren Street—a one-mile stretch in the center of Hudson. Known for its antique shop revival, the street becomes a scene right out of the North Pole for this Winter Walk in its 20th anniversary. With shops aglow and twinkling lights lining the lane, the setting seamlessly blends romantic charm with childhood magic. From the carolers and horse-drawn wagon to the petting zoo, live reindeer and Mr. and Mrs. Claus themselves, the night holds a slice of Christmas spirit that will suit just about anyone’s fancy. A Santa Parade kicks off the festivities—activities inside the shops and performances on the street. From jazz and classical to African drums and banjo, the sounds of the season surround and serve as the backdrop to a colorful scene of jester performances, balloon animal twisting, and face painting. The night ends with a magnificent firework display.

Hudson Winter Walk Special Event: Phil Kline’s Unsilent Night : December 3
unsilentnight.com/about.html
Unsilent Night, is a free-to-the-public community musical parade created by famed composer Phil Kline. The now worldwide event began as an idea born in 1992 when Kline composed a multi-track electronic piece and had friends gather to play different tracks simultaneously on their boom boxes. The outcome was so eerily hopeful and powerful that it took hold. Today there are marches using this composition in more than 50 cities around the world.  Kline himself will be conducting this December 3 event in Hudson and assigning parts of his original composition to participants to play through their own portable sound system. Participants meet at Basilica Hudson for a 4pm prep before proceeding to Front and Warren streets for the 5pm start time. 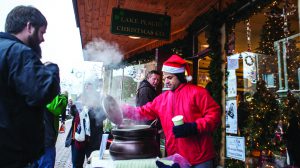 Lake Placid Holiday Village Stroll:
December 9-11
www.holidayvillagestroll.com
What could be better than a holiday stroll through the most quintessential winter town in New York? Lake Placid has been known for decades to be a venerable winter wonderland. Hosting the Winter Olympics twice, the town is a hub for winter sports enthusiasts and those seeking a glimpse of that snow-covered magic Lake Placid is famous for. The Holiday Village Stroll is a weekend for both couples and children alike, offering a range of festivities. Glide your way to holiday cheer at the skating party hosted at the 1932 arena or dance the night away with one of the live bands playing throughout the town. Shop the myriad of stores boasting holiday specials and then make your way over to the Soup, Chili and Chowder competition on Main Street. And if child-friendly attractions top your list of must-dos, there are countless events to choose from. Have breakfast with Santa and other North Pole characters, or make Olympic-inspired holiday ornaments. Don’t miss out on the traditional Yule log hunt at High Peaks Resort—a definite family favorite—and be sure to stay for the lighting of the log.

Stockbridge Main Street at Christmas: December 2-4
stockbridgechamber.org/visit/stockbridge-main-street-at-christmas
If you are feeling nostalgic this holiday season and looking for something quiet and quaint, you won’t want to miss the celebration in Stockbridge. The town, made famous by Norman Rockwell’s painting of the village during the holidays, is a lovely little slice of New England reminiscent of a time gone by. Twinkling lights and elegant wreathes set the perfect mood for the caroling luminaria-lit walk—bring your candle or flashlight and join in on the singing as you make your way from the Red Lion Inn to the First Congregational Church. Be inspired by a classic story about the season at the library event “Gather Around the Hearth,” or step back in time as you tour private homes, inns, and historic properties. The weekend culminates in the not-to-be-missed Stockbridge Main Street at Christmas re-creation. The town transforms into the Stockbridge of old—just as it was at the time Rockwell painted the iconic scene. With over 50 antique cars parked along the street and merriment and festivities for the whole family, you’ll be transported to a simpler time and reminded of what’s truly important this holiday season.

Manchester’s The Elf Express Train Ride: December 17–18
www.manchesterlionselftrain.com
This whimsical holiday train ride leaves from r.k. Miles Depot Station in Manchester Center and takes its travelers for a one-hour enchanted train ride through the scenic Green Mountains of Southern Vermont. Children will be filled with joy as they step aboard the festively decorated trains. The whole family will be singing along with classic Christmas songs led by the elves. And since Santa’s little helpers are trained at the Burr and Burton Academy (under the direction of Broadway and Hollywood song and dance man Jim Raposa) their dance performances are sure to captivate and wow the crowd. Refreshments are served and a magical tale is read about the one and only Christopher Pop-In-Kins—a loveable character who is hidden on every train, peeking out of the greenery to see just who has been naughty and nice. Best yet, each child will receive a gift from special guests Mr. and Mrs. Claus. It’s an hour-long extravaganza that should not be missed and will not soon be forgotten. 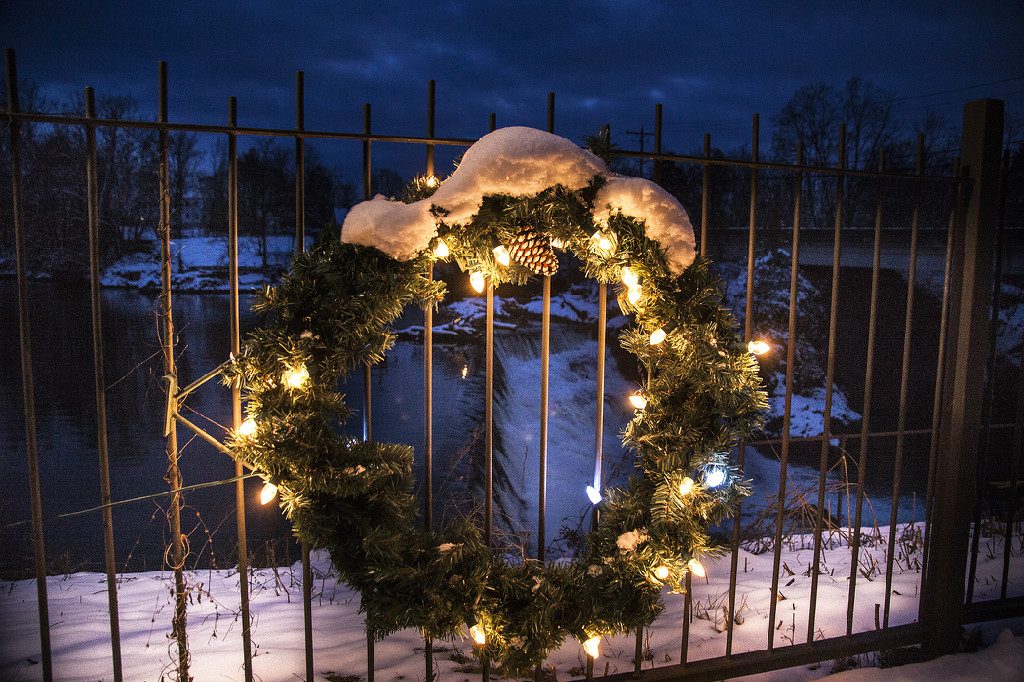 Valatie WinterWalk and Winter Parade: December 10
www.veravalatie.com/Winter_Walk.html
Santa Claus accompanied by the Valatie Winter Parade will ring in festivities throughout the village. Shop at stores, sample holiday food and enjoy live music and entertainment until 9 pm. WinterWalk on Main Street, sponsored by the Village of Valatie, the Valatie Santa Claus Club, and the Valatie Economic Redevelopment Association (V.E.R.A.) begins with a Winter Parade at 4pm. There will be sales at local stores, holiday treats, artisans, raffles, live music, dancers, entertainment and more. 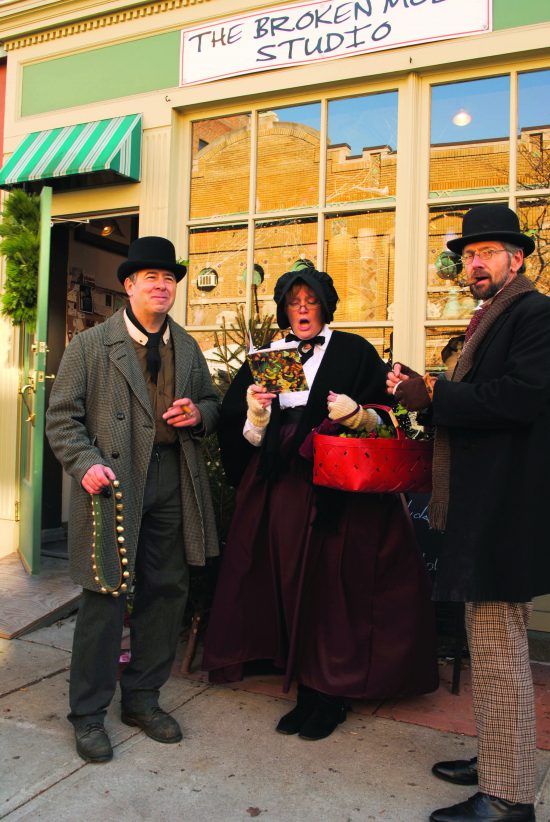 Troy’s Victorian Stroll: December 4
www.victorianstroll.com
More than 100 of the area’s best performers come together in the spirit of the season to transform historic downtown Troy into a stage of festivity. Music, dance, magic and storytelling are woven throughout the day into a tapestry of Victorian cheer. From delightful arts and crafts to delectable eats, vendors line the streets, bustling with activity and joy, as the whole town partakes in this remarkable winter festival. Businesses, from boutiques to restaurants, get in on the holiday spirit, creating window displays to impress. There’s even a contest for the best—this year’s theme is Celebrating Troy’s Bicentennial. Be sure to peruse the storefronts to pick your favorite. So mark your calendar this holiday season. There’s fun to be had, traditions to start, and memories to be made!