Latest Articles
You are at:Home»Issues»April 2018»Hometown celebs Jordan and Nicole

Millenials that made it

It’s not every day that your dreams knock on your door before you even finish college. But for two Capital Region natives, Jordan Hoose and Nicole Zelka, this was their reality. Through hard work, dedication to their passions, support from the coaches, teachers, families and producers in the Capital Region, these two twenty-somethings have beat the odds and are leading lives as touring entertainers. 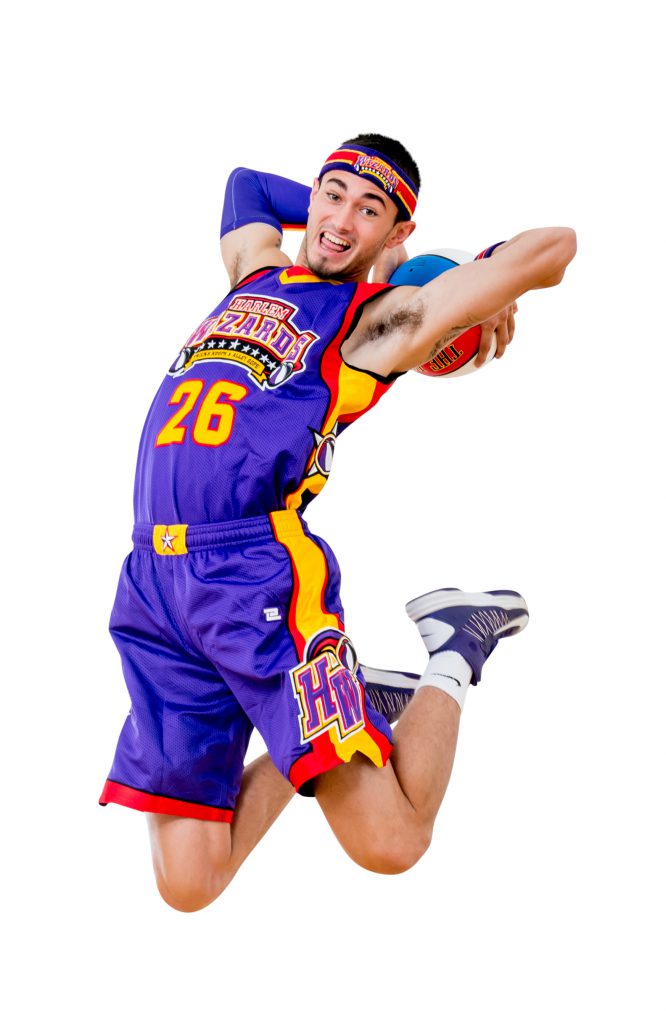 Jordan Hoose
There’s a video you can find on YouTube dated July 29, 2015. It’s a two-minute, 51-second remix of the best dunk sessions of Philmont native Jordan Hoose. The 6’4” local dunks over and over as the video slows periodically to let Jordan hang in the air for what seems like an eternity.
While it may seem that this was just a video of a few sophomores goofing around in the gym at Columbia Greene Community College, this was actually the video that changed the course of Jordan’s life after college. His journey with the Harlem Wizards, an entertainment basketball team, was about to begin.
“The owner [of the Wizards]saw the video and was interested,” Jordan recalls. “But I had two years of college basketball left to play.”
After transferring to Morrisville State where Jordan would finish his remaining two years, he admits he forgot all about the phone call. “I didn’t think I was going to continue playing basketball, honestly,” he says. “In my last year around October, I dislocated my left shoulder and thought I needed surgery. It turns out I didn’t, and I rehabbed well and finished my senior year.” He was stunned when a second call from the Wizards came in the spring of his senior year asking Jordan to play three pre-tryout games with the entertainment team.
“The transition from normal basketball to this was hard,” he says. “I didn’t know what to do, I was hesitant and just wasn’t interactive with the crowd.”
But while Jordan appears modest about the impression he left, the results say it all. Jordan’s official offer to tryout for the Harlem Wizards came in June and two-and-a-half weeks later, he received the call that he had made the team, a brand new Wizards team, in fact. He was nervous, but ready.
“The unique thing about the Wizards is that the games are our practices,” Jordan says. “In August when we have our training camp, we go over all the skits and plays, and honestly then it’s all just trial and error.”
As a member of one of the Wizards’ three full-time teams, Jordan, or “Hangtime” as he is now known, plays roughly 150 games a year from September through May, playing primarily at schools as fundraisers for the communities. With mostly kids attending, Jordan learned very quickly that being interactive with the audience is everything.
“As we started playing games, especially with my group of guys [on the Showtime Unit], they helped me see how to interact with the crowd and be more outgoing,” he says. “During the game, some players will go into the crowd and mess with a couple of the kids.” And unlike some of the other entertainment basketball teams out there, Jordan says they give the kids any opportunity they can to interact with the team between autographs, pictures, warm-ups and more. “You can meet us before, during and after in the gym,” he says. “We don’t leave until the last kid leaves.”
With every game, Jordan loves his work more and more. And even though it’s busy with not a whole lot of breathing room (around March, the Wizards played 30 games in 33 days), with a fun and supportive team next to him, he’s thankful for the hand he was dealt.
“Never give up on your dream. Even with all the setbacks, I had to keep pushing through it and it got me to where I am today.”

Nicole Zelka
About a year after Jordan’s life changed, so too did Nicole Zelka’s. It was May 17, 2016 when this Capital Region native auditioned at the American Music and Drama Academy (AMDA) in the hope that she would be able to pursue her passion of becoming part of musical theater. Not one week after her audition, she was accepted to the school.
“Everything happens for a reason,” she says.
Auditioning for schools throughout the spring semester of her senior year in Colonie Central High School was taxing, Nicole recalls. There just didn’t seem to be a place that was the right fit, and it led her to wonder whether musical theater was her calling. “I thought, is this really something I want to do? Will I be able to handle all the rejection?” But she pushed through her fears, which landed her at AMDA later that year.
“It was 8am to 5pm Monday through Friday and it was super hard work,” she says, adding that there are no general education class requirements at the school; it is all singing, dancing, and acting. “But it ended up being the perfect place for me.”
And it set her up well for the next phase of her life. AMDA provides its second semester seniors with ample time to plan for what’s next while they finish their schooling. Classes in her final semester were pushed between 5:30pm and 11:30pm, an effort to encourage Nicole and her peers to get out there and audition.
“I went to a couple of open calls and was doing pretty well,” she says. “I was pretty comfortable in the audition room.” This rare comfort in such a stressful situation seemed to make an impression at one specific audition. “I saw the posting for open calls for Rodgers & Hammerstein’s Cinderella tour, and I thought it was going to be just another fun experience.” 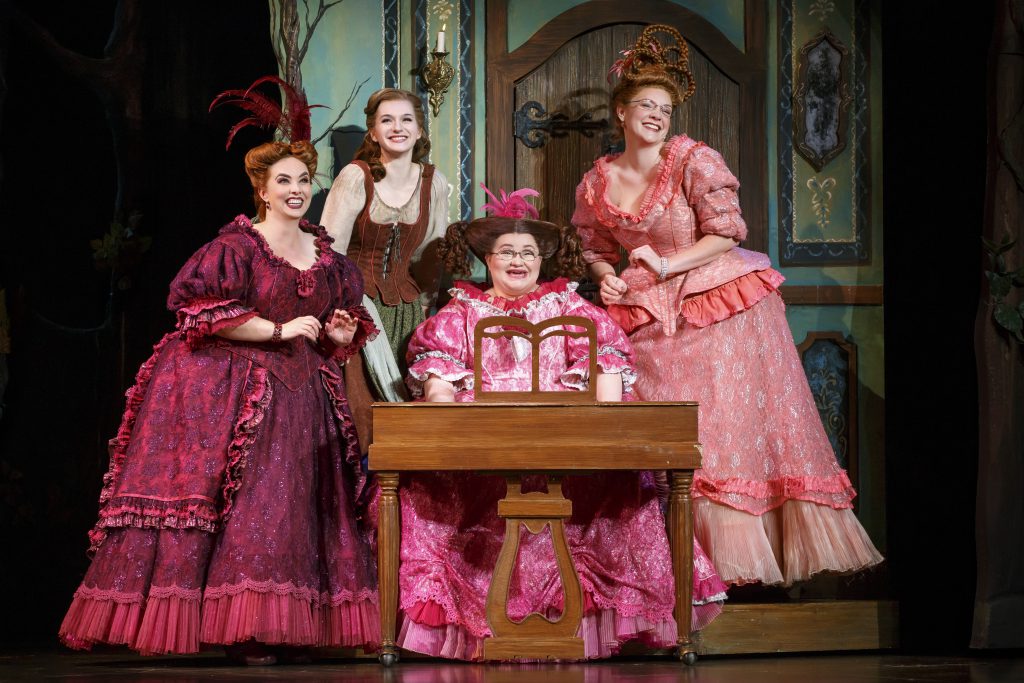 However, three call backs and one final call back later she was cast in the musical. It was May 4, 2017 and at just 19 she had landed her first job in a Broadway musical.
“I always knew this is what I needed and wanted to do, and I knew it was going to be hard sometimes, but in the back of my mind, I was, like, I will be fine,” she says. “I couldn’t think of myself doing anything else.”
Her hard work and good fortune paid off once again later that week when she was cast in the show Mama Mia! at Capital Repertory Theater in Albany, a role she says she is unbelievably grateful for as it prepared her for what would lie ahead in her role in Cinderella. “I did way more physically demanding things in Mama Mia! than I do in Cinderella; there was more movement. But having the schedule really helped me,” she admits. “I went in to Cinderella not knowing what to expect, but I did know the schedule.”
The Cinderella tour, where Nicole plays one of the step sisters and is an understudy for the fairy godmother, began in the fall in New York City with three-and-a-half weeks of rehearsals. Then Nicole and her crew shipped off to Anchorage, Alaska in early October to open the show. They spent a week and a half there before officially beginning the moving portion of the country-wide tour.
“It’s so cliché, but hearing those first couple of notes of the overture in our show is just so magical,” she says. “It gives me chills thinking about it, and you know, sometimes it gets really hard and we’re traveling on a bus from city to city every day … but at the end of the day, we’re doing our favorite thing in the world for two hours and fifteen minutes every night.”
When she looks back at how she got here, Nicole remembers vividly the image of her seventh-grade self sitting at her computer, looking at broadway.com, reading the playbills, watching the videos, being awestruck at the people who led such a life. But now, she’s living that dream, one she never takes for granted.
“People move to the city and waitress while they wait for that first big job,” she says. “I was ok with that. That’s what I was expecting, but to get this right out of school at 19 years old, to be doing this so young, I’m just so, so thankful. It’s crazy.”