Latest Articles
You are at:Home»Issues»May 2018»Selecting programs for a summer dance or opera festival is not easy

“It is so funny because I hear as many people saying ‘oh please give us something new, I want to see new work!’ as I hear ‘oh please don’t give us something new,’” Elizabeth Sobol, President and CEO of the Saratoga Performing Arts Center (SPAC) said in reference to the New York City Ballet’s summer residency there. “Trying to have something for everyone is a real challenge but that’s what we do.” Sobol and NYCB are not alone in this. Dance and opera companies throughout the region strive to present a mix of beloved classics and original works that appeal to both longtime fans and new audiences. Several factors were considered when this season’s choices were made. Among them: three centennials; local traditions and interests; current headlines; distinctive spaces; and the availability of unique programming. As a result, there really is something for everyone, at venues that are as much of an experience as the performances themselves.

Dance
Kaatsbaan International Dance Center was created in 1990 to give companies a place to create and rehearse new works. Set on 153 acres in Tivoli, “the Hudson Valley’s Cultural Center for Dance” is made up of studios and residences with a rustic appeal designed to complement the 1890s Stanford White “Music” Barn on the property. One of the studios has a dance space the size of the Metropolitan Opera House stage and doubles as a black box theater.
Gregory Cary, Artistic Director of Kaatsbaan, said the theater was designed to offer the best of both worlds. The large performance space enables dancers to move freely, but the 160 seats are positioned to give every audience member a perfect, somewhat intimate, view. “It is a very one-on-one feeling with the audience which is kind of unique,” he said. “Usually when you have that up-close feeling you are dealing with space restrictions.” Because most performances at Kaatsbaan are linked to creative residencies, audiences often get to experience brand new works.
Although Kaatsbaan ends its regular season in June, there is still time to experience some amazing performances. In May, Flamenco Vivo Carlota Santana, one of the nation’s most prominent flamenco and Spanish dance companies, will be in residence to create the works it will then take on tour. Moving Spirits Inc., a modern dance company from Brooklyn, will appear as part of the UpStream series, which celebrates emerging artists. And Jennifer Muller, a well-known New York choreographer, and her company, The Works, will preview the pieces that will premiere in the city the following week. 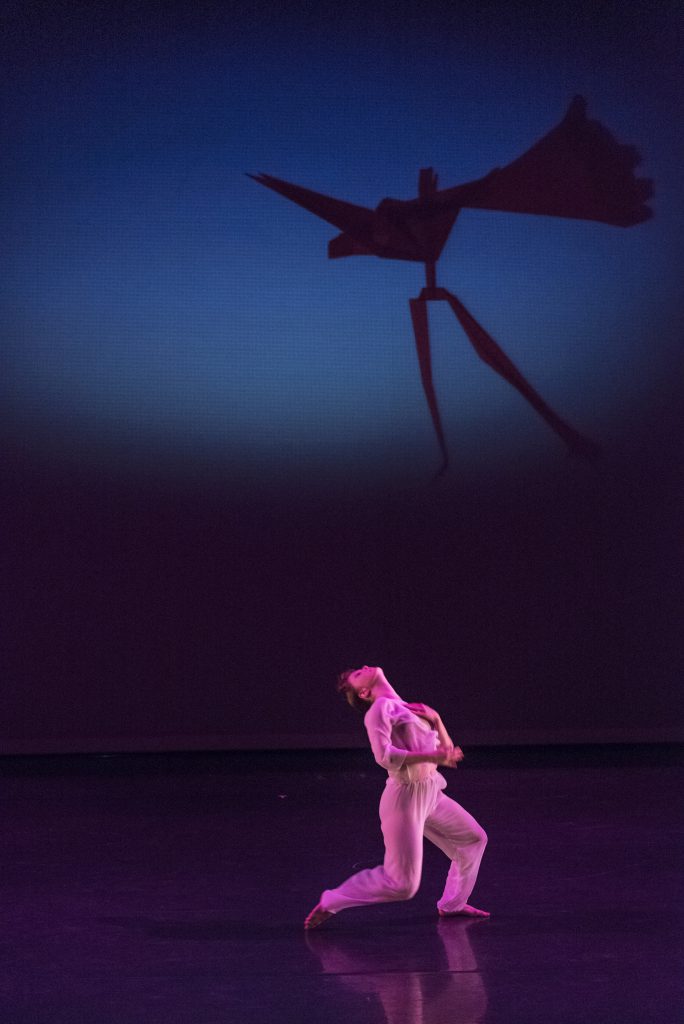 On June 2, the Ellen Sinopoli Dance Co. of Troy will be at Kaatsbaan to share a unique multimedia experience. The first in the two-part program is SleepWalks: The Body of Dreams. This work stems from a project launched in 2009 by video/sound artist Andrea Williams, a PhD candidate at Rensselaer, which uses sleeping audiences to explore the impact of sound on dreams. Upon waking, audience members record their dreams in a journal. Ellen Sinopoli and her dancers selected journal entries that could lend themselves to movement. Music was added and the result was a 45-minute multimedia performance. ESDC dancers transform themselves into the dreamers’ bodies as they are immersed in Williams’ video projection environments.
Sinopoli said Cary saw a performance of SleepWalks in 2016 and “was intrigued by it.” But it needed a companion piece to make it a full evening, so Sinopoli suggested another multimedia work called AFT.er. AFT.er is a joint effort of Sinopoli, David Allen, a visual artist, musician, programmer, and Research Associate at the Cognitive and Immersive Systems Lab at Rensselaer, and composer Maria Zemantauski, who is on the faculty at HVCC and has a private teaching studio at the Troy Music Academy. Based on the five stages of grief, AFT.er uses sensors attached to dancers’ bodies to project their movements onto screens in altered forms. Sinopoli said ESDC will use its week-long residency at Kaatsbaan to expand AFT.er from its current length of about 10 minutes to 20 minutes or longer.
“I am very excited that we can bring these two programs to Kaatsbaan,” she said. “We have been there many times, but this is the first time we have had a project like this, which is so technically oriented and involves multimedia. It is a new experience for us.”
Rounding out Kaatsbaan’s season will be BalletNext and solo dancer Miki Orihara’s Resonance II.
Saratoga Performing Arts Center—known for its amphitheater and sprawling lawn that together create a unique choice of indoor/outdoor viewing experiences for more than 20,000 people—has been hosting the New York City Ballet for 52 years. NYCB co-founder George Balanchine was an avid supporter of SPAC. Therefore, “You cannot have a New York City Ballet season at SPAC without a tribute to Balanchine,” Sobol said. “So, we open [this summer]with some of the great Balanchine works.”
The program, All Balanchine, contains three separate ballets, each with their own personality. “Square Dance is really about community,” said Sterling Hyltin, a principal dancer with NYCB. “The Four Temperaments is very forward-thinking and very minimal. It is set to Hindemith music and shows a different vocabulary for George Balanchine—sort of a hip forward or a turned-in leg or something you never see in classical ballet. Then, in contrast, Symphony in C is classical ballet.” She noted that other companies who dance Balanchine choreography tend to slow the music down, but NYCB “dances faster than any company in the world.” 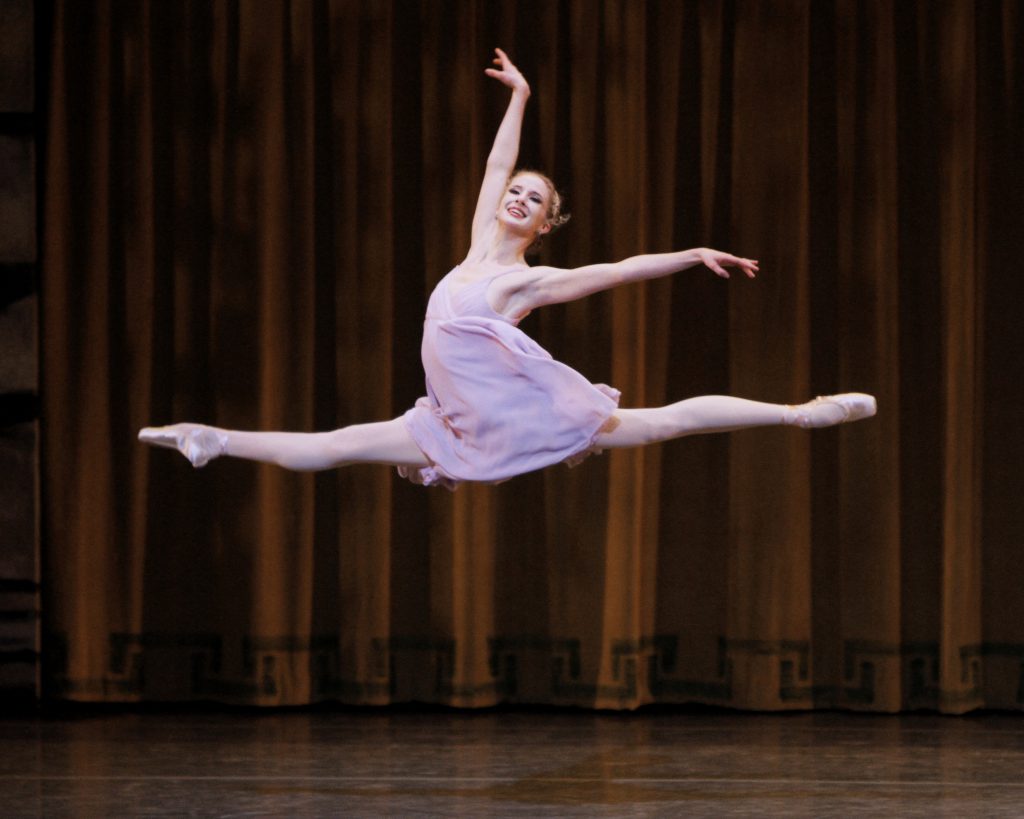 To please fans who asked for a story ballet, SPAC and NYCB chose Romeo and Juliet. “Nothing beats that story and that Prokofiev score,” Hyltin said. “It is very approachable to a first-time ballet-goer. You’ve got that story you can hold onto. It is so special to dance that ballet in Saratoga because as it gets darker in the sky the story gets darker and more ominous. And there is nothing like the balcony scene when you are actually outside.”
This summer, Romeo and Juliet will be particularly meaningful to Hyltin, who originated the role of Juliet in 2007. When she dances the part this summer, it will be for the last time. “This is probably one of the biggest moments of my career,” she said.
Also on bill is a program that celebrates the new choreographers making their mark at NYCB. 21st Century Choreographers features four new works by Justin Peck, Lauren Lovett and Gianna Reisen. Closing out the season is the NYCB Gala, this year featuring a tribute to choreographer Jerome Robbins and composer Leonard Bernstein, both of whose centennials are in 2018.
But NYCB is not the only dance group SPAC will be featuring this year. In late June, the legendary Ballet of Cuba will grace the amphitheater stage on one of only four stops on its North American tour. “That is a wonderful, miraculous thing,” Sobol said “They are going to DC, Chicago, Tampa and Saratoga. That is how exclusive this tour is.” Then, in August the Celtic group Trinity Irish Dance will appear. 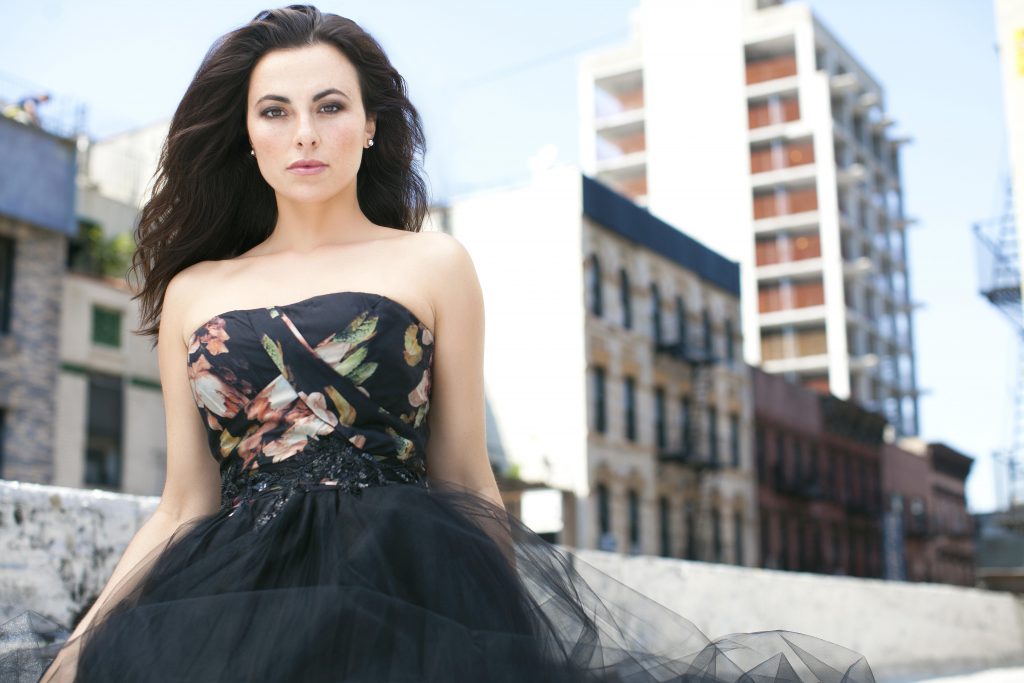