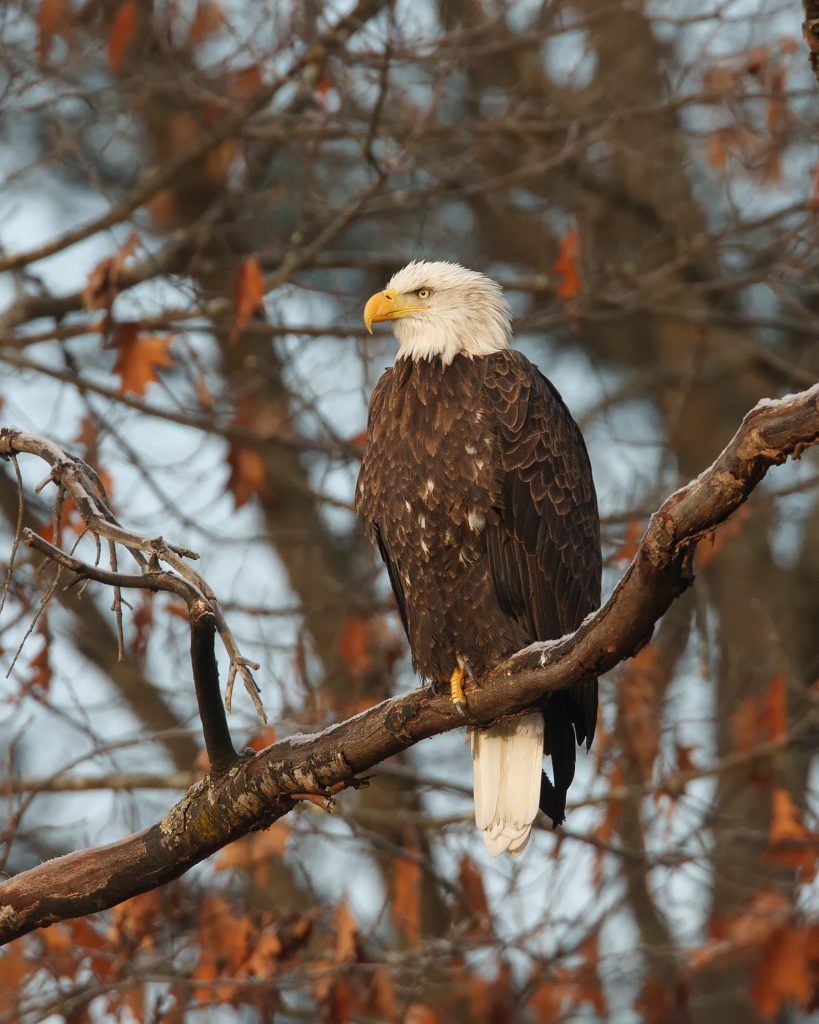 The magnificence and raw power of the Bald Eagle inspires awe. This raptor lives in a world of superlatives: a striking white head, bright yellow beak, huge 7.5-foot wingspan, and a hefty brown body of up to 14 pounds. The Bald Eagle is appropriately a potent national symbol of strength and is among the 25 largest birds in the world. If that doesn’t impress, the fact that Bald Eagles build the world’s largest bird’s nest—weighing up to 5,000 pounds—just might. Bald Eagles pair for life, remaining on or returning to their same nesting grounds for up to three decades, each year adding to their already abundant avian abode.
The Bald Eagle is relatively easy to find in our region but that was not always the case. By 1960, due to indiscriminate hunting practices and harmful chemicals introduced to the environment, specifically DDT, there was only a single pair of Bald Eagles left in all of New York State. The NYS Department of Environmental Conservation’s Bald Eagle Restoration Project began in 1976 and reintroduced eagles in central and northern New York State. By 1989, this hacking project had reached its goal of establishing ten breeding pairs, and was ended. The offspring of these birds have continued to thrive and disperse and, coupled with sensible laws outlawing both eagle hunting and DDT, today more than 170 pairs of eagles nest in the state which is more than twice the historical levels of the early 20th century!
Kirstie saw her first Bald Eagle 25 years ago at Woodman Pond in Hamilton, NY, where a successful nest was established in 1990. Her grandfather was a prominent birder in the community and was part of the Bald Eagle observation team there and introduced a fascinated girl to the wonders of that productive nest site. Rich didn’t see his first Bald Eagle until he was an adult but it was on Lake Colby in Saranac Lake where he grew up; the eagle was chasing an osprey over a tasty trout. Several years ago the two were amazed to watch an adult eagle soaring majestically amongst the skyscrapers in midtown Manhattan, an incredibly surreal sight.
Winter is the best time to view eagles here in the Capital Region. Resident eagle numbers are augmented by migrants arriving from northern New York and Canada. Wintering eagles arrive in December and peak in January and February. While eagles can be observed virtually anywhere, they are much more common near open water. As lakes and rivers begin to freeze, their feeding areas constrict to a few predictable locations.

Capital region sighting spots
Among the best places in the area to spot Bald Eagles is from the overlook to Cohoes Falls. Binoculars or a spotting scope are helpful to observe the birds perched on branches over the water, but they are large enough to be seen well with the naked eye, even from a distance. When not soaring, eagles can often be found in the middle and upper levels of the trees, the tops of power poles or devouring their meal of fish, waterfowl or carrion directly on the ice. Check the trees upstream above the falls and also look over the park walls to the treetops below to possibly catch an up close “eagle eye” view of one of these magnificent creatures mere yards away.
If you don’t see any eagles at Cohoes Falls, check downstream around Peebles Island, especially from the park behind the U Haul on Ontario Street. Other great places to observe eagles in winter include the Mohawk River upstream from Cohoes Falls to the Route 9 bridge in Halfmoon, the Hudson River between Fort Edward and Mechanicville, and even along Route 787 between Albany and Troy. Bald Eagles are also regularly reported from Coopers Pond in Brunswick, from Henry Hudson Park in Bethlehem (or from across the river in Castleton) or while diners are enjoying a tasty beverage at Yanni’s Too in Coeymans. An astute observer can witness a dozen or more eagles from a riverside seat on the Amtrak train between Albany-Rensselaer and New York City during winter and only slightly fewer during warmer months. You might even see a “convocation” of several eagles sharing a meal on the ice floes of the river.
Remember that Bald Eagles don’t acquire the telltale white heads and tail feathers until their fourth or fifth year so don’t assume that the enormous bird is a Golden Eagle, which are very uncommon in our area, or a vulture, most of which have migrated south for the winter. If you are lucky, you might see a pair of eagles perform a dramatic aerial display, as two birds fly to great height, lock talons and then tumble perilously back toward the earth. The birds will break off at the last second just before crashing to the ground. Bald Eagles mate for life but they apparently like to live dangerously.
For optimal viewing options, arrive early (7-9am) or stay late (4-5pm), when eagles are most active. Eagles prefer dense, tall trees near the water’s edge where the tell-tale white head of adults will help you find them or look for the enormous flat profile of eagles soaring high above. Ice floes and islands are also a great place to find eagles enjoying their meal. If you plan a winter trip, look for areas of open water, especially near power plants, waterfalls or tributaries. Warmer or agitated water aids eagles in finding their meals and they will congregate there, sometimes in spectacular numbers during particularly cold winters. Remember to be patient and stay warm. So, pack up the kids, binoculars and a thermos of hot chocolate and head out to the nearest hotspot!
Happy birding.
Kirstie Fanning is a Field Biologist for the Golden-Winged Warbler Project with the Palisade Interstate Park Commission. Rich Merritt is the Director of Operations for Audubon New York.

— By Kirstie Fanning and Rich Merritt